Our trip to HMP Warren Hill 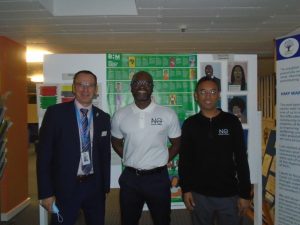 We set out the day before our visit to Warren Hill Prison at lunchtime on a cloudy afternoon accompanied by showers throughout our journey.  It was a bonus that Sean had some decent music to keep us company, a mixture of R & B, soul and classic reggae helped pass the 11 hours round trip.

With not much traffic on route, we managed to get into Felixstowe and book ourselves into the Premier Inn just before 6pm.  After settling in and checking our presentations one last time, we searched for local restaurants and decided on the Blue Nan Indian restaurant.  It was an enjoyable experience and we decided to retreat back to the Premier Inn straight after.

An early start on a cold frosty morning, once we defrosted the car windscreen, we made the short 30 minute journey from the hotel to HMP Warren Hill.  After going through security and navigating our way through the many locked doors, we arrived in a large room and set up for the day.

From the outset, we became extremely aware of the security of Prison life and the logistics of the delivery were complex due to the shut down areas of the Prison in order to manage residents and staff shifts.  This highlighted how important HMP Warren Hill felt the race awareness training was and to compliment other work around equalities.

The surroundings were extremely rural which through discussion attracted a certain group of demographic and we were able to explore this in further detail through encouraging critical thinking reflecting on values and beliefs and challenge perspectives and views .

We worked with 48 Prison officers during the day and discussed various topics around racism that included a deeper look into biases and how they are formed along with the effects of stereotyping people.  In particular, we explored the power of media and social media as the main drivers to misinformation and bias.

During a long lunch break, we were given a tour of the Prison visiting the Falconry and the other resources to the residents.  The Prison clearly pride themselves on the community work they carry out which was visually evident throughout.

Following the sessions, we were approached by the Prison officers who were overall complimentary about the delivery and used words such as thought provoking , challenging and insightful.  It was evident that the discussion learning and outcome was positive for all.

‘Thank you for the way you held the audience and had them engaged in conversation. They are still talking about this today. I think it has had a positive impact and really pleased you could be part of this’