We worked with Primary school pupils at Ysgol Bro Banw in Carmarthenshire delivering  general anti-racism workshops. The school requested the content to be based around Black history linked to racism and to have a focus on sport.  The sessions highlighted the history of racism from America and the civil rights movement to racism as we have seen it in the UK in years gone by to the current era.

Each of the workshops included short video clips of footballers getting racially abused both in the professional game and at grassroots.  The pupils were then given the opportunity to share their views on the affects racist abuse has on individuals.  This was followed up by them discussing as a group what they could do if they were victims of racism themselves or how they could support other victims in and outside of school.

Throughout the workshops, ex-professional footballer Sean was able to share his own experiences of dealing with racism and promoted the importance of reaching out for support and not to suffer in silence.  Both workshops also included a discussion on racist words with a historical timeline from when and how the words were used in society. 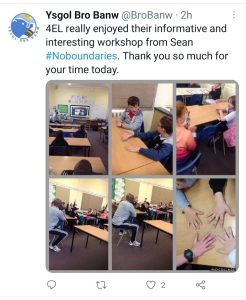 Following the workshops, it was great to hear the responses below from the pupils.

“I enjoyed learning about Racism.”

“I liked learning about all the skin colours in the world. Also the other countries and about slavery.”

“I liked learning about the boy who played football and was bullied. What to say and what not to say, and how people dealt with it.”

“It was fun and you got to play a game.”

“I loved it because it was really interesting to learn things I hadn’t learnt before from someone who knows a lot about Racism.”

“Brilliant because of all the things we learnt.”

“Amazing. He was fun, it was mindful and good to teach us about Racism.”

We would like to thank the school and the pupils and send our best wishes as they continue their learning.